Celeriac -  love it or hate it?
Normally, in our house, it's confined to mash,
with a generous knob of butter and plenty of black pepper,
but not anymore.
This soup was delicious.
Definitely one of the best I've ever made. 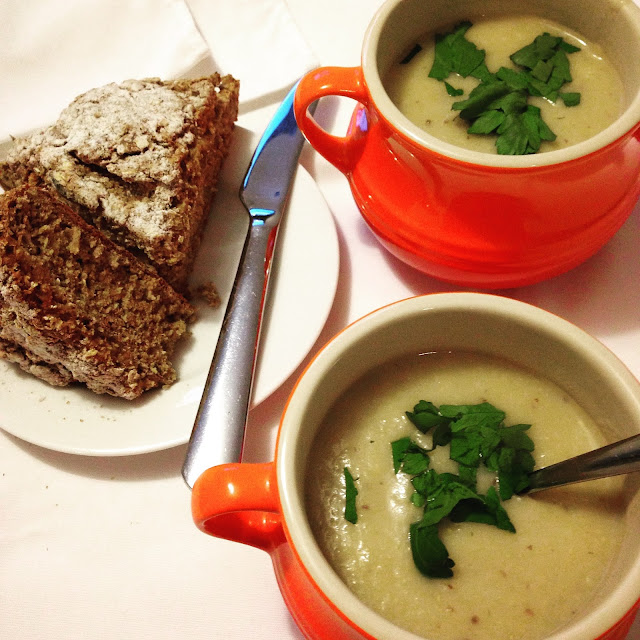 The leftovers were amazing too.
I had some prawns that needed using up,
so I added them when heating the soup through.
It was so tasty.
Give it a try and let me know what you think. 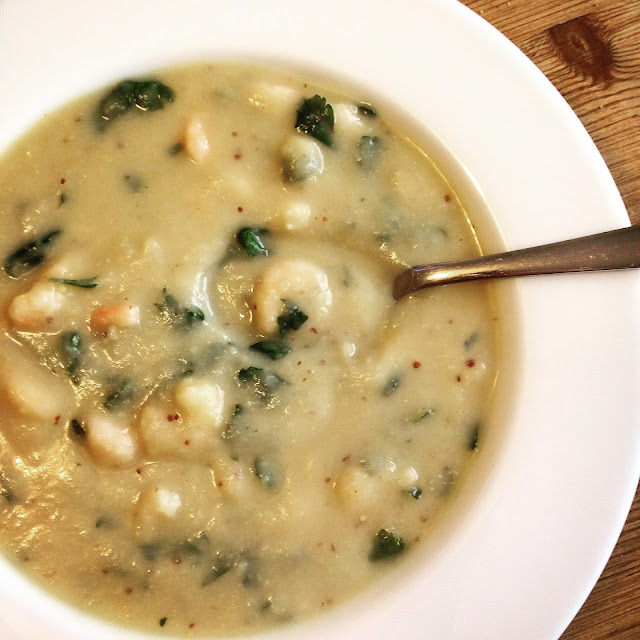 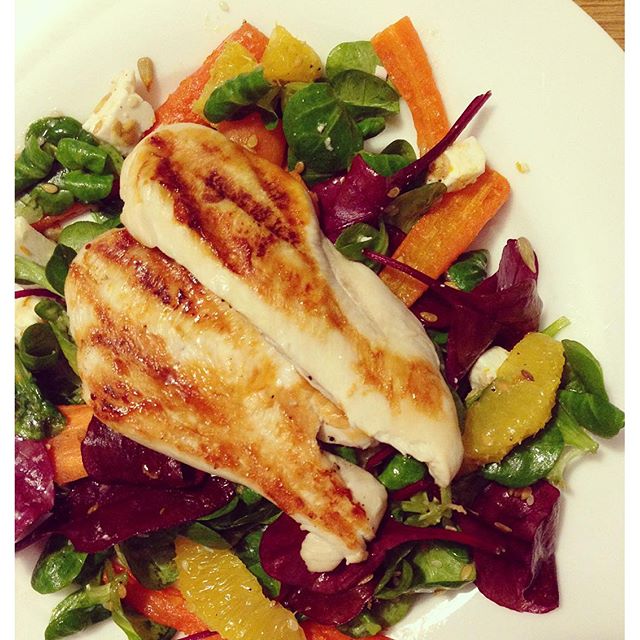 Posted by Keep It Sweet and Simple at 6:58 pm 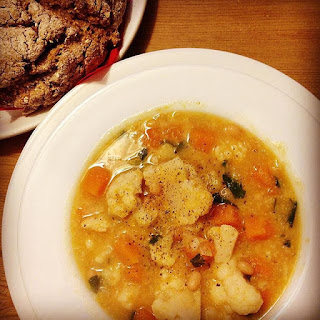 This year it's all about  'clean eating'.
We're trying to eat more fruit, veg and natural foods, and
keep processed foods to a minimum.

Here's a delicious and simple pineapple salsa that we had with gammon steaks. 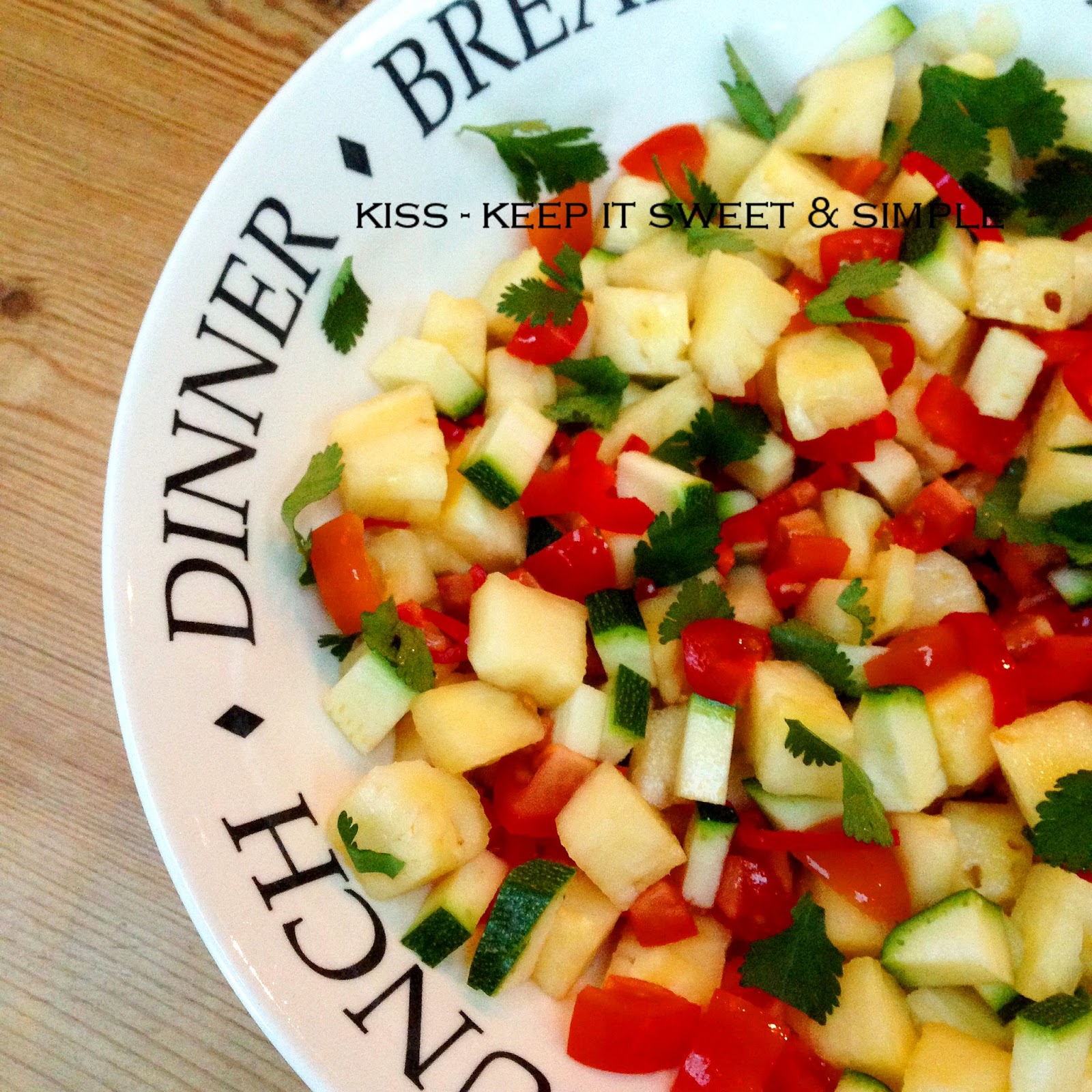 Chop up some fresh pineapple, courgette, cherry tomatoes, a red chilli and some coriander.
Mix it all together.
You can use tinned, drained pineapple if you like, but fresh ones are quite cheap right now.
Mine was only £1 in my local Tesco.
We like to have this at room temperature, rather than straight from the fridge -
the flavours are much better that way.

Posted by Keep It Sweet and Simple at 7:42 pm

It's my birthday next month, and last week Mr Kiss bought me an early birthday present -
a Combi Microwave !
Don't laugh.
He says not to even mention the steam iron that I got for our Anniversary!!  Ha ha!
No, seriously - the microwave was exactly what I wanted.
My last one sounded like a tumble dryer with a penny stuck in it - and took about 10 minutes to heat a bowl of baked beans.

So, I am on the lookout for comi/microwave recipes - know any?

My first success has been cauliflower cheese.
Now, it says this serves 4, but we polished it off between the 2 of us!! 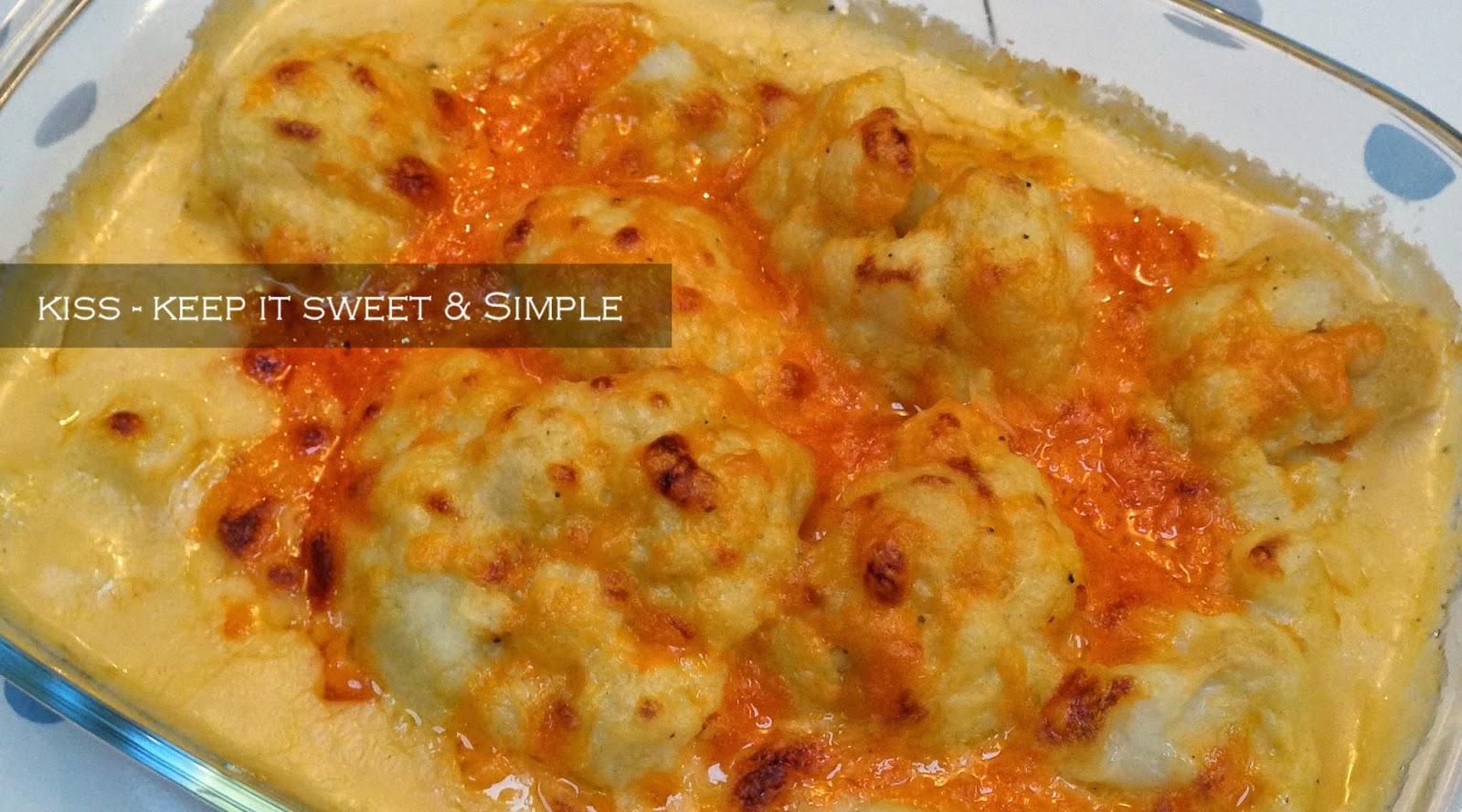 1. Place cauliflower upside down in a bowl. Add water. Cover and cook on Medium for 10 mins. Drain.
2. Melt butter on High for 15-30 secs. Stir in flour and mustard. Cook for 20 seconds. Add milk gradually. Stir well and season. Cook on High for 2 - 3 minutes, or until thick and bubbling. Stir once halfway during cooking.
3. Stir in 60g grated cheese. Put the cauliflower into a shallow microwave dish and pour the sauce over. Top with the remaining cheese.
Cook on Combination (using metal tray accessory) Convection 220C + Warm for 15 - 17 minutes, until golden brown.

If you don't have a combi microwave, you can always use your oven for the last part of cooking.
Posted by Keep It Sweet and Simple at 1:43 pm

I don't mind long and complicated recipes when I'm in the mood to cook,
but for a mid-week supper, I want something that I can put together quickly and,
if it all goes in one dish, that's even better.

Here's my version of  Smoked Fish & Cherry Tomato Rarebit
Basically the same, but where they make the rarebit sauce from scratch, I used a packet of cheese sauce!! 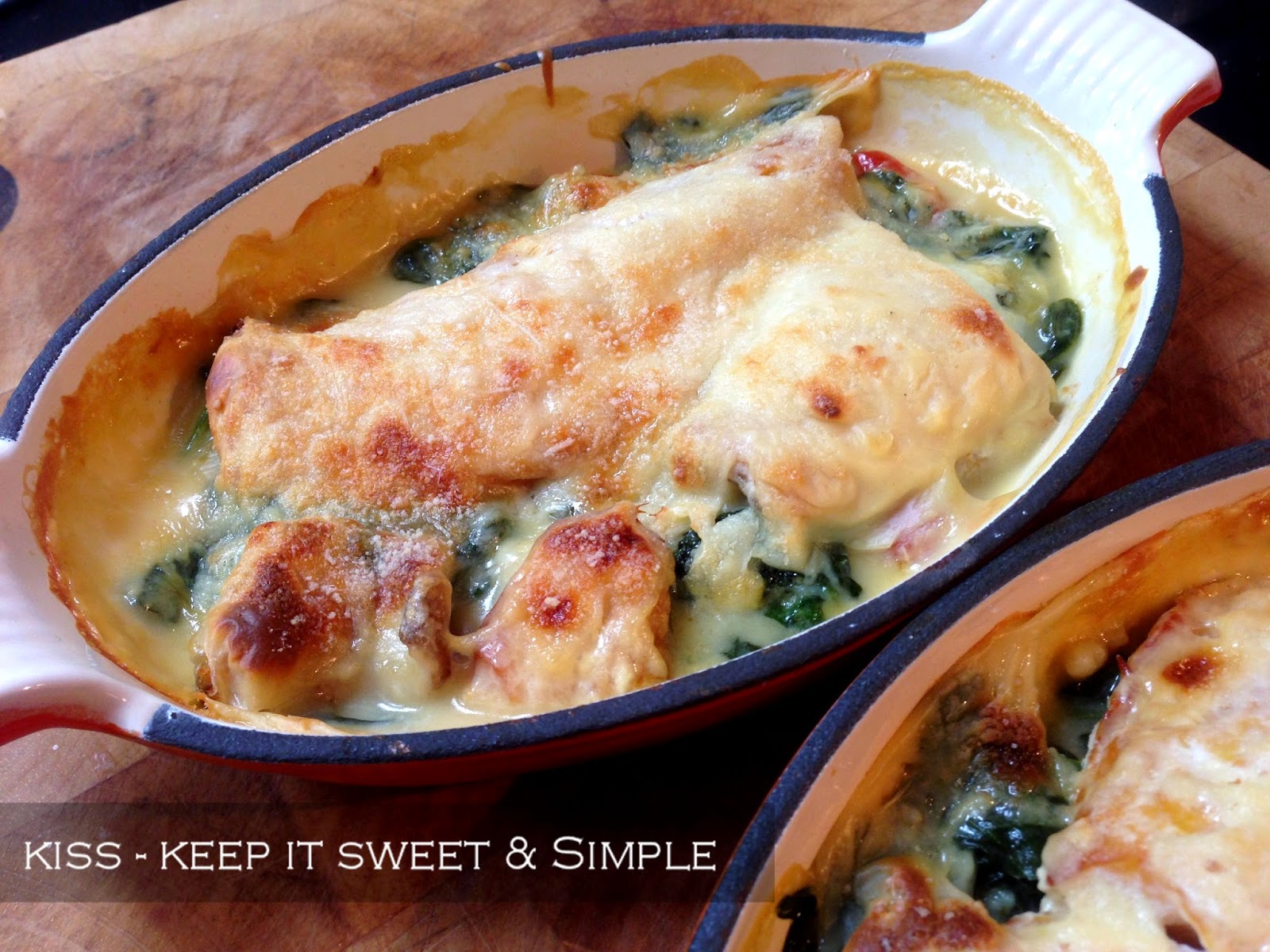 Melt a small knob of garlic butter in a large frying pan. Add the tomatoes and heat through.
Tip them into 2 shallow baking dishes, and spread into an even layer.
Melt another small knob of garlic butter in the frying pan and cook the spinach over a high heat, until wilted.
Tip the spinach into a colander and  press, to drain off any excess liquid. Season with salt and pepper
and arrange over the tomatoes.
Cover with the fish fillets.
Make up the cheese sauce as per the packet instructions. Stir in the tbsp of wholegrain mustard.
(Don't make the cheese sauce too thick, or you won't have enough to cover the fish)
Spread the sauce over the fish, completely.
Sprinkle over the parmesan cheese.
Bake fo 25 - 30 mins, until browned and bubbling and the fish is cooked through.
Posted by Keep It Sweet and Simple at 6:48 pm

I am trying to eat a more Paleo diet (like a caveman!)
For me, that means no rice, pasta, processed foods, cakes biscuits etc.
Remember - I did say TRYING !   :-)

So, instead of a big bowl of steaming pasta, I served my Bolognese with cabbage.
Yes - cabbage!  Honestly, it's better than it sounds.
In fact, no-one even missed the pasta. 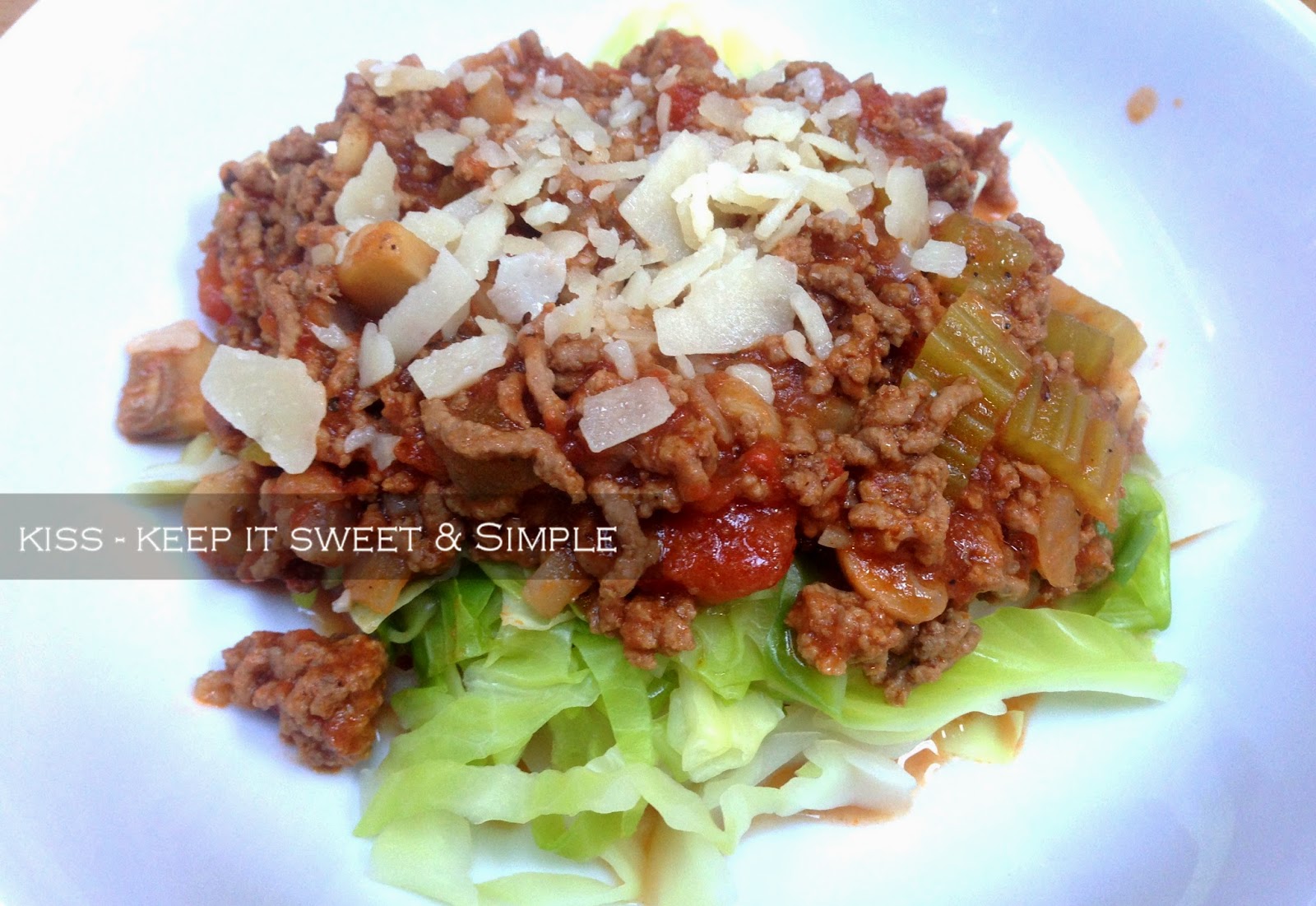 Finely shred your cabbage and lightly boil, or steam.
(Don't over do it - you still want it to have some bite)
Posted by Keep It Sweet and Simple at 3:04 pm

Keep It Sweet and Simple

View my complete profile
Hi there, welcome to my food life!

If you have any questions,
or want to share a good recipe,
I'd love to hear from you.